As I mentioned HERE a long, long time ago, they've added a Bed Bath & Beyond store here in Petoskey. At the time I decried its existence and, in general, the buying of shit you don't really need. Well, circumstances have changed and I decided there might be a few things I now need to go along with my sparklingly clean house (and new girlfriend). As someone who works in architecture, you'd think I'd be up on interior design terms. Turns out, I'm not.

I have a plain down comforter that is covered by what I have always called a "comforter cover". I didn't see anything in the store labeled as such and, as my fellow men will attest, you NEVER ask for assistance. I did notice things called "duvet covers". Megan later explained that this was indeed what I was looking for (I've had the same one now for a long-ass time). She thought my lack of knowledge was cute, even though I was wondering what had become of my life now that I was shopping for duvet covers. She informed me that it's not the type of thing most men buy.

But why? Surely there are plenty of single men out there that, at some point, have to buy such things. Was there something that could be done to get these men excited about making such a purchase? Some way, perhaps, to make the experience less emasculating? I think I know how: Make duvet covers men will want to buy. With the help of my 3-D modelling program, I was able to mock up a duvet cover I think most single men might appreciate. I mean, what guy wouldn't want to fall asleep under a blanket of delicious barbecue ribs? 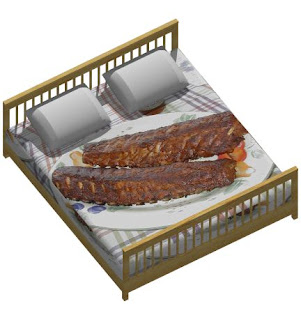 Or, as Flannery suggests, sizzling bacon? 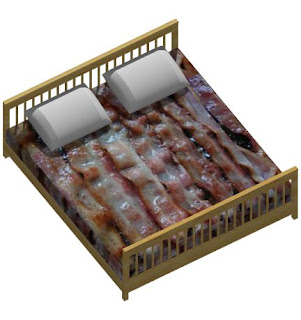 I think there is an untapped market out there. Just think of the possibilities! The variations are only limited by our imagination.
Posted by Some Guy on 3/08/2007

Poor Megan has her work cut out for her.

Genius idea. Although I own one, I honestly can't remember going out to buy it because the idea of purchasing a cover for something called a "duvet" is plain revolting. Guess I must have blocked it out of my memory.

At first I thought that was a Bacon! I think you should add a bacon design to your line of designer duvet covers.

I like it, but I'd also be happy if it had a Bulls or Bears symbol on it.

Indeed I do, Randy.

First of all Chris, you are a ginormous dork.

Second of all, I would imagine that most single (straight) men hope at some point to trick a female into their bedrooms, in which case they would REALLY want to avoid pork product decor. (Unless the female is Lulu. She might be into the bacon bedspread.)

Randy- She has no idea what she's gotten into.

Cherry- Thanks! I can tell you'd be one of my first customers.

Phil- I don't think that'd be too difficult.

Megan- How does it feel to be going out with a ginormous dork?

That bacon duvet is hot!

I suppose if you want to really sell to that male demographic, you need the duvet cover to look like a hot girl naked laying on top of the bed face down.

That way, when you are under the cover looking up at your ceiling mirror Chris...

Or is that just me?

Look at that sweet, sweet bacon frying in its own juices. Mmmmmmmmm.

You never cease to amaze me Chris, ever.

besides, i thought 'duvet" meant "sleeping bag" in French??

Now this is one of the funniest post / comments ever!!! Chris, you are ginormous dork, and of course, we all love it, it is charming.

Good luck to you my friend. It can be done, but it takes the will.

BTW... the theme for this awesome marketing gig.... MEAT. You are right. Meat sells.

You know, my brother, who is a really successful lawyer, (and could certainly have treated himself to a duvet cover or two) had the same one that my mom bought for him when he was in college until he got married. (He was 38 when he got married.)

Chris, you should make us all one with our avatar images. We would be your blog/duvet army

The bacon one is great. Will you make fried egg pillow covers too?

Or will they be Hash Brown design?

How about a bed skirt with pork drippings?

Bed Skirt (also Bed Ruffle, Dust Ruffle or Valance): A decorative piece used to cover the boxspring and legs of the bed. It fits between the mattress and boxspring and hangs to the floor.

Great idea Chris!
I knew what a duvet cover was.
Does that make me metro?

Skyler's Day- I think you're onto something.

Valerie- Do you want to place your order now?

Boob Lady- I'm happy to do it.

Anon.- Thanks for the support!

Lulu- How about a duvet cover with naked women wrapped in bacon. Jesus, I'm sick...

Scarlet- There's also got to be a frozen pizza one. How could I forget that!?

Mixednut- Long time, no see! It might make you metro. Let me ask you this - how often do you exfoliate?

I'm saddened you're learning about Duvet Covers. I've learned about them and it's terribly, terribly dull.

This sucks. I still don't know what a duvet cover is. Um...

Wow. Since Lu & Megan are friends & all, it might not be the best thing to be teasing Lu with bacon in your bed.

Waking up to a fried breakfast would be nice every morning lol. Hope you are happy with your new purchase :)