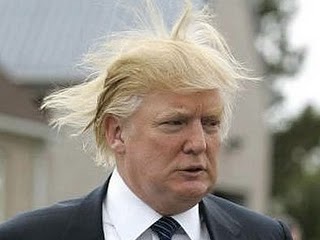 That is what I want one of these interviewers to say to him.  Sorry about all this. I'm really upset about the lack of integrity the media has shown towards their reporting on Trump.  You might say to me that I shouldn't worry and that he's done this all before and he's not really gonna run and it's just a publicity stunt.  Regardless of whether this is some sort of ego-maniacal piece of performance art or a legitimate campaign, he is hurting us with the things he says.  Everyone in the media should be holding this fucker's feet to the fire and insisting that he answer questions.  For instance, here's CNN's John King letting Trump control the interview:

I find it hard to believe I'm saying this, but he's worse than Bush.  He either needs to open himself up to the same scrutiny he is requiring of others, or he needs to be ignored.  And any American who values intelligence should refuse to watch his show, boycott his sponsors, and cease to support his businesses in any way.  And don't think that I can't appreciate comedic sideshows.  Anyone who reads this blog knows I can find the comedic value in about anything.  It's just that this has gone beyond sideshow and become something dark and hateful and ignorant.  Something that is harming the country and making us look ridiculous.  I mean, seriously, this shit has got to stop.
Posted by Some Guy on 4/28/2011 11 comments: 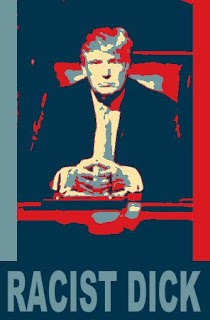 Isn't there a way to take his poop-filled megaphone away?
We've had to suffer through his bullshit for far too long.
Enough is enough.
Posted by Some Guy on 4/28/2011 1 comment:

I know we've all had different life experiences and everything.  I just want people to know it hurts me, too - bullshit like this.  It really hurts, knowing what we could be if we stopped being so fucking terrified of everything.
Posted by Some Guy on 4/27/2011 5 comments: