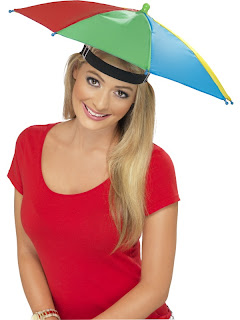 I'm not sure if anyone still looks at this blog. Maybe some of you still have me on some sort of Google Reader-type feed and saw a new post and thought, "Holy shit! That guy never posts anything! Why now?" After all, it's been almost a year since my last post. In fact, while I'm at it, let's take a look at my blogging production by year:

Even though I don't post, I still occasionally check my stat-counter thing out of curiosity to see what people are searching for. I can also see how people found the blog. I noticed one had found me through a page on Wikipedia. I clicked on it and it turns out one of my posts is a source for Umbrella Hat on Wikipedia. I swear I had nothing to do with this. If this is to be the legacy of this blog - a resource for people who randomly Google "umbrella hat" - I'm cool with that.