AFOL A Blocumentary from AFOL on Vimeo.

I do, but clearly not as much as the people in this half-hour documentary by director Jess Gibson. I found this over at The Documentary Blog and it's just the sort film I like--one about people doing what they truly enjoy even if most other people think they're weird. Some of the shit they make is pretty incredible. So if excessive turkey intake has made you immobile, spend some time with this cool little doc.
Posted by Some Guy on 11/27/2010 2 comments: 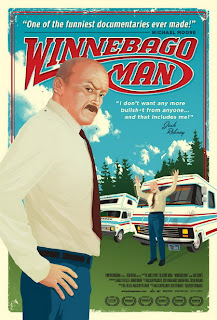 I've been waiting a long time to see this one.

Although you may not be immediately familiar with the name Jack Rebney, chances are you've witnessed his curse-laden tirades on YouTube captured while making trade videos for Winnebago motor homes.  For a profanity connoisseur such as myself, you must believe me when I say they are works of fucking art (go HERE if you haven't seen them--NSFW).  Director Ben Steinbauer decided he wanted to see whatever became of Jack.  I liked this documentary for the same reason I like a lot of documentaries--we get to see the story unfold as the film is being made.  It's the unpredictability that I find incredibly compelling.  As the movie starts, Ben isn't even sure whether Jack is still alive.  In fact, based on Jack's demeanor in the videos, he assumes he's probably died of a heart attack or some other stress-related malady.  Luckily for the filmmaker and the audience, Jack is still alive and (somewhat) willing to talk.  I'll let you find out the rest for yourselves.