The Biggest Nerd I Ever Knew... 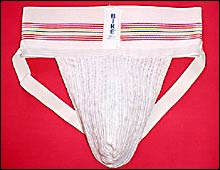 And for those smart alecks out there, no, it's not me.

There was this kid I went to junior high with that was the personification of the word "nerd". Let me start by coming clean. I'm sure there were plenty of times I was guilty of tormenting this poor kid. I like to think that, knowing what I know now, I'd be a little more sympathetic, but I was in junior high and junior high kids are fucking cruel. However, he did bring a lot of it on himself.

First of all, he had all the textbook signs and symptoms of a nerd. He wore uncool clothes (probably Garanimals) and shoes. He neither washed nor combed his hair. He walked funny and he sucked at sports. His mom used to drop him off by the bike racks each day right in front of the gathered masses of pre-pubescent vultures ready to give him his daily dose of early morning shit. Looking back, I'm impressed that he had the fortitude not to resort to a Columbine-style rampage.

There were two things he did that elevated him above just your run-of-the-mill nerds. One was that he wrote love letters to a handful of the most popular girls in our class. In them, he described how he had fantasies about them. Big mistake. The notes instantly became public and he had nowhere to run.

The other thing he did that really baffled me was what he did in the gym locker room. At the beginning of the school year, you had to purchase a gym uniform. The guy's uniform included a jockstrap. None of us ever wore it except him. What he would do, in order to never be completely naked, was put the jock on over his underwear and then stretch the legholes of the briefs down around his ankles. It required a lot of coordination and a lot of extra time - enough time that the rest of us noticed and gathered around him in a chorus of taunts. He did this every day.

Given my disdain for bullies, it saddens me that I didn't have the balls to stick up for this kid, or at least give him some tips on how to fly under the radar. I guess I was too nervous that one wrong step and I'd be exposed for the nerd that I was, too. That's how I remember junior high - living in fear. The best bet was to keep a low profile. One moment everything could be fine, but one embarassing fuck-up and you'd be eating lunch by yourself for the rest of the year.

By the way, doing an image search for "jockstrap" is not something I intend to do again any time soon.
Posted by Some Guy on 3/28/2007

Flann- I don't think there's anything wrong with them, but wearing them back when I was in junior high would have been ill-advised.

Did this kid also ask to make a map of Guido's basement, or am I barking up the wrong tree?

Frank- Nope, wrong tree. Geo and Dave know who it is I'm sure. Maybe Grant & Phil, too.

Wait, you mean it's not Dave?

Don't worry Chris-- with years of therapy, I'm sure he's doing better. Either that, or waiting outside your house with a big knife in a ski mask.

I think I know. I think he went to my church.

my curiosity is peaked...

Just reading it makes me cringe. It is so sad when a kid is so socially handicapped. Then equally sad how the rest of the kids, who are fearful of being tossed into the fringe, isolate them further. Yuck. Middle school sucked / sucks.

Did he dress up like a teddy bear in high school, or am I still barking up the wrong tree.

GOD, I f'kin HATED jr. high. I think I flew under the radar just enough though.

I was one of those shy nerds that was NOT good at any sport as well.

Is first name Chris or Eric?

So who DID make a map of Guido's basement...and why?

And who the hell dressed up like a teddy bear in high school...and again...why?

Johnny- Trouble is, he'd blend right in with that ski mask up here.

Anon- Yeah, it was not a fun time for me. High school was much better.

Frank- He didn't go to York, so I don't think you knew him. Give it up.

Teri- You did the right thing.

Val- I'm not gonna give names, but the Guido's basement guy was crazy and it was somehow D & D related, I think. The teddy bear was on Halloween. His initials were E.S.

Does ES rhyme with Bernie Danders?

Nope, he was in our grade. I think there's a pic in one of our yearbooks if you still have yours.

Hmmm...the yearbooks are currently stashed in boxes and won't come out for a few more weeks (we're getting our basement finished)...I guess I'll just have to wait.

Any more hints on who the dork is?

I knew a kid in 7th grade who wore his Star Trek velour shirt to school, and carried a phaser. He got beat up a lot.

I was bullied in jr. high and I ended up killing the kid via black magic. I wrote about it about a year ago. I believe one of your posts inspired the story. Beware.