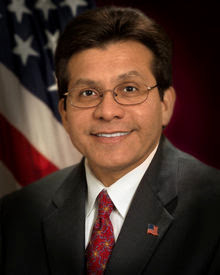 I suppose I could join in the chorus that's calling for this douchebag's ouster, but what's the point? He'll only be replaced by some other douchebag.

I must admit, The Bush Administration has been successful at one thing - wearing me down.

There have been far too many times in the past where I've said to myself, "Self, you watch. This is the thing that's gonna bring these guys to their knees." Every time I've been wrong. You might say, "Well, his poll numbers are in the toilet." Big fucking deal. He's still gonna do what the fuck he wants. He has a strong enough apparatus set up to run interference for him. The other thing he has going for him is the fact that most people just don't give a fuck. I know there's a democratic congress now, but I just don't think they have the nerve to really hold people to account. I hope I'm wrong.

I mean, if people can't see through this shit by now, nothing I do or say will change that.

I'm still going to mock and deride these turdsicles at every opportunity. I'm just done trying to sell it to those who refuse to admit what a bunch of crooked fucking bitches these people are.

Don't give up, Chris. That means the bad guys win.

I'm going to continue to deride those who, despite overwhelming evidence, refuse to admit that they got totally snowed by this complete pack of thieving morons. I have no problem saying "I told you so." Think of the future-- these people have to be so humilated and outed as the pieces of shit that they are that none of them will dare run for office or serve in the government again.

They are wearing everyone out. My Dad, I lifetime Republican, just finished Barak Obama's book, and is done with this administration. Despite the fact he is still in office, Bush is doing alot of work for us by alienating people in his own party.

Yes, these douchebags are really transforming most of the hard line rightwingers I know. At least my right wing friends change the subject or become sheepish when the subject is the mess the douchebags in power have made of things.

Can I just say, I love the word "douchebag"? I think if I ever went on the Actor's Studio and they asked me what my favorite curse word is, I'd answer without hesitation: Douchbag. I'd also look James Lipton right in the face when I say it.

Well, I'm not going to make any promises about Democratic nerve, but you'll notice that there are an awful lot of hearings going on in Washington now about things that have been swept under the rug for the last 6 years.

My right wing friends have resorted to saying "Better to fight them over there than over here" for just about every single thing I ask them...

I don't have any right-wing friends. Does that make me a bigot?

Nice job on the fuck count.

who is this guy and why does he matter?

Your mocking & derision is still vital, so keep at it. When I think of what these people have done vs. a horn job inappropriate-BJ-receiving president that the country practically lynched, I get so mad I can barely contain it.

Death to the infidels!

Did I say that outloud?