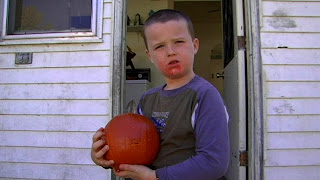 I really liked this one. I read about it over on a documentary blog I follow. It's a movie about a small town called Sidney, OH (zip code 45365). It's full of great little moments and is shot beautifully. The way the scenes are edited is very well done. I highly recommend it. You can actually watch the film online through August 6 if you can stand the annoying ads every so often. If not, add it to Netflix. It's not out on DVD yet, but you can save it.
Posted by Some Guy on 7/31/2009 4 comments:

This was posted over on Nevada Thunder and I thought it deserved sharing. I've been to Amsterdam on five different occasions and I have always had a positive experience. Those of you who've been there know that it is an absolutely beautiful city. Parts of it look like they're out of a storybook. The people are extremely friendly and there was never a moment I felt unsafe. Bill O'Reilly and the Fox News Staff would do well to visit Amsterdam and check it out for themselves before they go spreading their bullshit.

My sincere apologies to all Amsterdammers. These people know not what they say. They're morons.
Posted by Some Guy on 7/30/2009 17 comments:

More Singing In The Car...

I'm a fan of foreign music. I don't think you necessarily need to understand a song's lyrics to enjoy it. I have tons of Spanish-language music as well as Italian, French, Portuguese, and even Zulu. There's this one foreign-language band I listen to, but I have yet to figure out what language they're singing in. The lyrics are sort of a hybrid of English and something else (Turkish?). The song is called "Yellow Ledbetter". I sped up the guitar solo to save you some time.

Edited to add: My apologies to all the Pearl Jam fans out there (Beckeye) for butchering the hell out of this song, but come on, you have to admit some of the lyrics are hard to understand. I actually like the song. I think it's catchy.

*Edited to add- Don't worry, I found the actual lyrics:

Of course you do! Why else would you be reading this blog? This one comes courtesy of blog-pal GetKristiLove. It's a film called The Triplets Of Belleville, a trippy animated movie about a whole bunch of strange shit that contains very little dialogue. As I've said in the past, I don't like to give a lot away in my movie posts, but check out the trailer, maybe read the blurb about it, and then add it to your Netflix queue. I found that watching this one while intoxicated in some way may enhance the viewing experience.
Posted by Some Guy on 7/26/2009 9 comments: 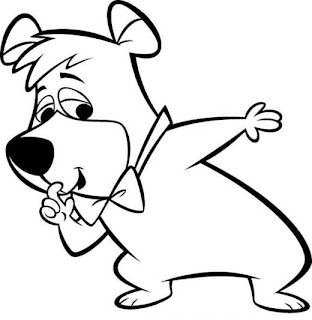 Don't tell Yogi, but I took a dump in his pic-a-nic basket.

I Know You All Think I Only Watch Documentaries...

...but I can also appreciate narrative films with great performances. I just got through watching three films I'm sure many of you have seen by now. I liked each of them.

The first was a movie called Milk (or as I like to call it, "Melk"). I had already seen the Oscar-winning documentary The Times Of Harvey Milk, so I knew a lot of the story. Sean Penn was excellent.

The next one was The Wrestler. I hadn't seen any trailers or clips from it before I watched it and it wasn't what I had anticipated. I thought it was great - very sad - and Mickey Rourke was outstanding.

Lastly, I watched Doubt. Again, this film was full of wonderful performances. I think this Meryl Streep person might have a bright future in acting if she keeps working at it. She was phenomenal. As my friend likes to say, she's so good, she could believably play a fourteen-year-old boy.
Posted by Some Guy on 7/21/2009 14 comments:

Another Ham-Handed Attempt At A Post By Yours Truly...

I know a lot of you have recommended this Goldman Sachs article by Matt Taibbi in Rolling Stone. I'd like to as well. It's long, but worth your time. I did a similar post about his AIG article. I can never really know if an article like this is 100% accurate, but I think it raises a lot of questions about how Goldman Sachs operates and how it benefits from having a number of former employees in influential government positions. Check it out.
Posted by Some Guy on 7/16/2009 8 comments:

A Found Item That Amuses Me But I'm Not Really Sure Why...

These are Wangus beef cattle, a Japanese breed that is a cross between Wagyu and Angus cattle. I was surprised to learn that "wangus" was an official word and more than just slang for male reproductive anatomy. We (me and the guy I work with) use it architecturally as well, but as a verb. When a wall or roof or other architectural element is jutting into a space in an undesirable way, it is said to be "wangussing", i.e.: "That wall is wangussing out into the middle of the room." I'm not sure why I'm telling you all this, but I know if I don't, you'll get to this blog and be heartbroken to find that there's nothing new to read.
Posted by Some Guy on 7/15/2009 9 comments:

I'm terribly sorry I missed your 61st birthday yesterday.
Oh, come on. Please don't make a scene.
I'll make it up to you. I swear.
How's about another sequined tank top?
Would that cheer you up?
I thought so.

Barely Interesting Some Guy Factoid: When I was a kid, I thought his name was "Richard Cinnamon".
Posted by Some Guy on 7/13/2009 11 comments:

My sister has my three-year-old niece repeating this line. It's hilarious. This is my interpretation. If you time it just right, you can play them simultaneously.

I Hereby Announce My Retirement From Competitive Bejeweled Blitz Playing...

I know some of you play this game on Facebook. It is time for me to quit this bitch cold turkey, so I filmed my last game. I got sick of the sound effects a long time ago, but decided to turn them back on for the finale. I hate this miserable game. It's weird to watch it on video and see the obvious things I missed. I have no idea how some of you have scored above 150,000.
Posted by Some Guy on 7/10/2009 12 comments:

This Is One Of Those Posts Where The Picture Has Nothing To Do With The Text...

Occasionally I have a hard time finding a picture that captures what I'm trying to convey, but I still always like to include one with every post. In this case, I'm using one that Skyler's Dad sent me a while ago. He saw it and thought of me. I love it when people send me random shit like this. I can't guarantee it'll always end up on the blog, but you never know.

What I wanted to talk about was our new neighbors. I haven't had the pleasure of meeting them yet, but thanks to the fact that they spend a lot of time outside speaking loudly, I've learned a few things about them. 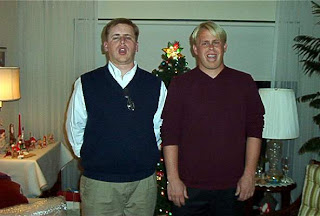 That's him on the right and me on the left in case you were having trouble telling us apart. He came to visit over the Fourth. This was his first visit to Michigan in twelve years.

My brother and I haven't always gotten along. A lot of it probably had to do with lingering shit from our childhood. He tended to get in more trouble than I did and school never came as easy for him as it did for me. Plus, we had to share a room until I was a sophomore in high school which, as any of you who experienced it know, can only serve to heighten tension. No matter what, though, he could always make me laugh. He's lived in Los Angeles for the last ten years, so I only get to see him briefly when he's in Chicago for Christmas.

It was great having him here. It seemed like we were able to talk and laugh about stuff without any of the petty childhood crap getting in the way. We reminisced a lot about our growing-up years. He told me what it was like living at home while my parents were going through their divorce. I was in college at the time and didn't have to deal with it like he did. He told me all about working in film and all the bullshit that goes on. He's usually reluctant to talk about the famous people he works with, but he did tell me what it was like working with documentary director Errol Morris because he knows how much of a fan I am.

There was a time when I felt like any sort of meaningful relationship with my brother was never going to happen. I'm really glad I was wrong.
Posted by Some Guy on 7/08/2009 14 comments:

It's been a while since I went a whole week without posting anything. At this point, my Google Reader cache is overwhelmingly full, so I am going to go through it and empty it without reading many of your brilliant entries. Could you all do me a favor and do a summary - no more than ten words - of your posts during the last seven days? Thanks!
Posted by Some Guy on 7/07/2009 22 comments: