Once I had that one down, I moved on to pieces that were slightly more complicated, like this dragon:

As my ability improved, I tried to make my foldings more personal. I wanted my art to reflect who I was and what interested me. One of my most prized pieces was this toilet made from a dollar bill (It actually flushed, too!)

Eventually, as with all great artists, obsession took over. I stopped eating. I stopped bathing. All I wanted to do was fold. It was when I woke up from a five-day folding binge and found this Origami hermaphrodite that I knew that I had a problem and that it was time to find a new creative outlet.

To The Folks At Crooks & Liars And The Daily Show...

I used to write more about politics. Ever since the election, I've needed a break. I still follow stuff, but not with the intensity I had pre-election.

I am kind of excited about this Arlen Spector defection. Not that I think it's going to have a huge impact. At least it will force republicans to continuously answer questions about why they suck so bad for a few news cycles. It would be so cool if Susan Collins and Olympia Snowe, the two moderate republicans from Maine, followed suit. I wonder if people within the republican party have figured out how they would respond to some sort of mass exodus.

I can only imagine the sort of behind-the-scenes political gamesmanship that went on to make this switch happen.
Posted by Some Guy on 4/28/2009 2 comments:

Documentary Film Of The Day: Wrangler: Anatomy Of An Icon... 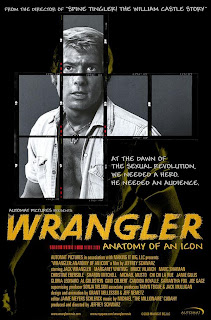 Say what you want about her, but she was a funny lady
who didn't seem to take herself too seriously.

You Can Say What You Want About This Post...

is definitely not ruthless.

While we're on the subject:
Why ruthless?
Why not edithless?
Or agnesless?

What is it that makes it so awful for
an individual to be "without ruth"?

And why don't we refer to honest,
well-meaning people as "ruthful"?

And what's the deal with airplane peanuts?


I like The Contender. Jeff Bridges (one of my favorite actors) is awesome. Gary Oldman is perfect. Joan Allen is great. Sam Elliot is great. Even Christian Slater is tolerable. If you haven't seen it, check it out.
Posted by Some Guy on 4/23/2009 1 comment:

I know my posting/commenting has been lax lately. It might be due to the fact that I was recently diagnosed with Rollie Fingers, a rare neurological disorder which makes typing excruciatingly painful.
Posted by Some Guy on 4/21/2009 15 comments:

My strong categories include:
My weaknesses are in things like:
Tonight's show was pretty good. I got the Final Jeopardy wrong, but I did good in a category about Grammy-winning comedians. I was pissed to miss a toilet-related question. I've edited the show down to just the clues I tried to answer. There were a whole bunch of clues where I had no idea.

Which Comic Strip Character Do You Think Smells The Worst?...

The following are my candidates. If you'd like to make a case for another one, please do so in the comments.

Obviously, you can't make a list like this without mentioning Charlie Brown's hygienically-challenged pal, Pigpen. Anyone who is forever enveloped in a cloud of fecal dust has got to be more than a little ripe. Shit, just look at him. I seriously doubt this fucker wipes.

I see Broom Hilda and the first thing that pops into my mind is the smell of a cauldron full of moldy onion juice. It's been rumored that Broom actually supplements her witch salary by selling the abundance of radishes that grow between her toes at a local farmer's market.

If my family heritage has taught me anything it's that Scandinavians should never be underestimated when it comes to their ability to "bring the funk". I'd wager you could wring about a quart of beer farts out of that burlap tunic of his.

While contemplating this post, I asked Megan which character she thought smelled the worst. She thought Hagar probably smelled bad and then added, almost apologetically, "I bet, um...Cathy probably smells, too." It stands to reason. She seems to have everything else going against her. Why not chronic body odor? Plus, like Pigpen, she strikes me as a non-wiper.

This one is my dark horse, but one who deserves consideration. Sure, he looks sanitary, but I highly doubt he got the name "Funky" because of his love of Bootsy Collins.
Posted by Some Guy on 4/16/2009 25 comments:

When are you dirty hippies gonna get a job?

Seriously, go back to your bongs ya buncha longhairs!

Labels: love it or leave it

Documentary Film Of The Day: Blindsight... 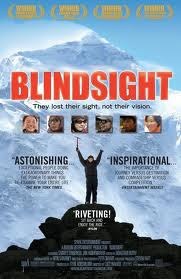 I'd like to thank Kristi for her recommendation of Blindsight, a documentary about a group of blind Tibetan teens who are inspired by the story of Erik Weihenmayer, the first blind person to sucessfully climb Mt. Everest. Erik and a team of experts travel to the Himalayas to help train 6 students at a school for the blind and guide them up Lhakpa Ri, a 23,000' peak right next to Everest. There is beautiful, inspiring footage of the climb, but what I found most interesting were the backstories of each of the teens and how the experience affected them. I'd Netflix this one if I were you.

Anything To Get That Godforsaken Picture Of Pete Rose Off The Screen... 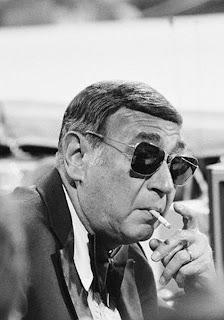 Carlin loved language and words and all the cool things he could do with them. He had a bit about things you never hear. In it, he takes great pride in being the first person ever to arrange certain words in a certain order. He takes credit for being the first person in history to ever utter the following sentence:

"As soon as I put this hot poker in my ass, I'm going to chop my dick off."

I always thought this was a cool concept. So allow me to follow in his footsteps and publish a sentence that has never existed until today:

I invite the rest of you to add a sentence in the comments that has never been said or printed before in the history of human existence. Then, pat yourself on the back. You're #1!

*Edited to add: I know there is no way to be 100% sure that you are indeed the first. I'd suggest putting your sentence in quotes and doing a Google search. If nothing comes up there's a good chance you're a winner!
Posted by Some Guy on 4/09/2009 21 comments:

The Pete Rose Seal Of Approval... 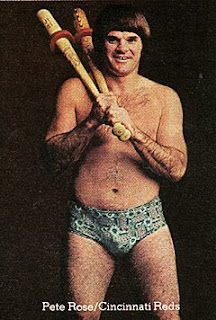 All I know is any underwear
that can withstand the gastric distress
Mr. Rose no doubt inflicts upon them
is a bargain at any price.

Those of you who have been reading this blog for a while know there is nothing quite as satisfying to me as orgasmic gut-laughter - the kind that causes intense abdominal pain. And the thing is, I never know what'll bring it on. The first time I referred to it was in THIS POST. This time around it was thanks to a recent post by Skyler's Dad. Now, many of you will watch the video and think, "Yeah, it's pretty funny, but not lose-your-shit funny." What can I say? I have no idea what triggers it either. I just enjoy it when it happens. Also, note the Sunday afternoon bedhead in full effect. 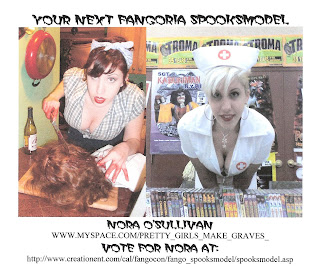 It is with great pleasure that I add my name to the growing list of endorsements for the candidacy of Nora O'Sullivan (daughter of longtime blogger friend Bubs) for Fangoria Weekend Of Horrors Spooksmodel. I'm sure many of you have already cast your vote, but in case you haven't, please do it right now HERE. Last I checked she was in third place and needs our help to put her over the top. Together we can show the sheer power of our ever-expanding blogging community. Besides, the Bubs family are good people.
Posted by Some Guy on 4/04/2009 8 comments:

This is a neat short film I found by director Jessica Yu. Jessica has made some great documentaries that I'd recommend (In The Realms Of The Unreal, which I posted about HERE and Protagonist - both of which are available for instant viewing.) The video also features Perez Prado doing the classic Cherry Pink And Apple Blossom White. 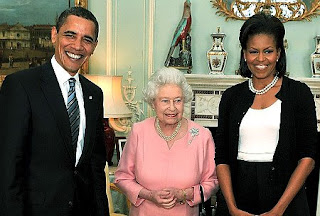 Everybody knows by now that the President Obama gave Queen Elizabeth an iPod as a gift during their recent visit. Now, I'm all for gift-giving, but does the Queen really need anymore fucking gifts? I doubt it. What sort of paper do you think they wrapped it in? I'm guessing it was THIS. Do you think they did that thing with the ribbon where you pull a scissors edge along it to make it all curly? Do you think she shook the package before opening it to try and guess what it was? Do you think she had to feign excitement when she opened it? ("Ooh! An Izod! Thank you! I totally needed one of those!") Do you think they included a gift receipt and informed her she could exchange it if she already had one?
Posted by Some Guy on 4/02/2009 23 comments: 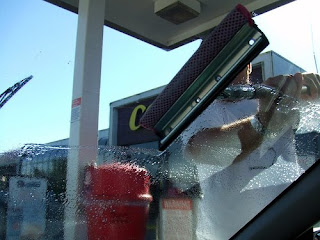 So I got up today, took a shower, fed the cats, and was out the door headed for work. Turns out I was low on gas, so I went to the gas station to fill up. While I was there I decided to squeegee my windows, something I don't normally do. I was very careful not to leave any streaks. Let me tell you, they look really nice.

Bwahahahahahahaha! April Fools, motherfuckers! I totally did NOT squeegee my windows and you all fell for it! SUCKERS! Damn, are you people gullible. Hook, line, and fucking sinker! All I did was spritz my windshield with a little fluid and ran the wipers.
Posted by Some Guy on 4/01/2009 20 comments: