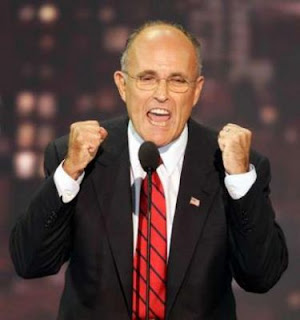 I sense there aren't many people who read my blog that plan on voting for Giuliani, but in case you're afraid he has a chance of winning, allow me to allay those fears. He cannot win. It's not because he supports gay rights. It's not because his abortion stance is at odds with most republicans. It's not even because of his checkered marital history.

It's because his name is Rudy.

There can't be a president named Rudy.

Rudy is this guy: 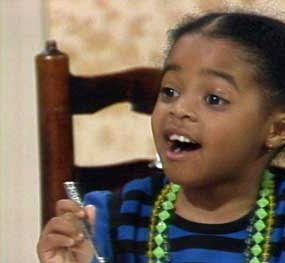 Of course, he could use his given name, Rudolph, but then people think of this: 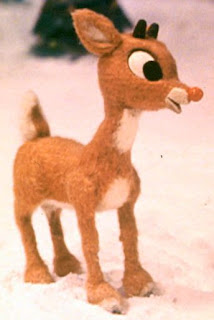 You are totally right. Plus he's not sexy and I hear he has a temper that rivals Yosemite Sam's.

I will vote for Rudi. I don’t care about his name. It’s a good name. Would you prefer Barack Obama with the Dumbo Ears? I would welcome Rudi’s temper, too. Maybe he will kick some Republican ass and bring them back in line.

coffeypot- You see, I think people being "in line" is what got us into the mess we're in right now - too many people in lock-step not thinking independently. I can't imagine voting for any republican and yes, I would prefer Barack and his big ears. Probably means he's a good listener.

...yeah, but it sure is fun watching him try to suck up to conservatives.

I'm not sure who is trying harder for a conservative make-over: Romney, Guliani or McCain. All seem to be selling out and counting on everyone having a short memory.

His name makes me think of: "She thinks I'm cuuuuuute!"

Huh. That was very scientific.

I keep humming the Specials song A Message to You, Rudy.

Lulu- Holy shit! That song played on my I-Pod today!

I agree that there are too many people in loc-step right now - the Democrats. Their only agenda is getting back into power by bashing Bush. I'm not a total Bush fan, but he is better than any Democrat we had had since Roosevelt, and he lied to the people, too. He has stated what he believes is the corrct path for the American people - and no, I don't agree with all that he does and says - but he DOES have a plan. Some of what I hear from Dems is bordering on treason, not free speech. And Barck may be a good listner, but I'm not so sure he hears.

coffeypot- Sorry, but I don't have the stomach to get into a political debate with you, especially since you have such a drastically different view of what is actually going on right now. It's pointless.

I can't imagine a Republican being elected, no matter who it is. G.W. has turned this nation into Democratic for sure, after his mess. Having said that...not sure who I would vote for, Obama or Hillary. Not sold 100% on either.

Thanks! I bet it would be fun to sit in a bar and discuss our differences. It wouldn't take long, though. About one beer is all I can handle these days.

See, and when I think "Rudy" I think of that little dude from the movie, um, "Rudy."

When I hear the name "Rudy" I think of one person - Tootie from "Facts of Life."

I think of that dumb kid from the Notre Dame movie. Wah wah wah.

Don't worry though, it won't take Rudy long to start gay bashing and talking about a "culture of life." Otherwise the Republicans just won't vote for him. Hell, a Democrat can barely get to be President without doing the same. As OK as Rudy was for NYC, it won't take him long at all to start goose-stepping.

No doubt Russert will be talking this up next Sunday morning.

he's running? From what? The Feds?? Aliens??