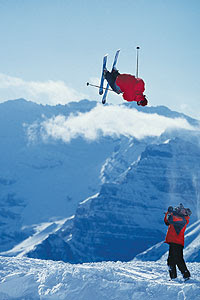 Yesterday was one of those perfect skiing days you dream about. The snow was nice, I didn't have to tend to any injuries, and, while it wasn't particularly warm, the sun was out which made it very pleasant. My achy muscles are a small price to pay for such a fine day.

In the cafeteria at the resort where I patrol, they have big screens and play Warren Miller films throughout the day. Most people who are into skiing know Warren Miller. He has been making skiing films for years and has an unmistakable voice which he adds for narration. The films are beautifully shot and often include humor and exotic locales not often associated with skiing, like Iran or Kenya. For those of you who can't understand the allure of skiing, I highly recommend checking out his films. Here's a few clips from his film, "Cold Fusion". Part of it was filmed where I patrol.
Posted by Some Guy on 2/19/2007

Growing up in Colorado, I do indeed understand the allure of skiing. But, not so much since I sprained my knee and now I'm chicken shit.

I've only been twice
And I almost killed myself
both times
I suck at it...

I skied once at Villa Oliva in Bartlet. But I enjoy reading stories about mountain climbing an skiing. I think I'd prefer sitting in a skiing lodge, though.

I suck at it as well. Maybe you can teach us "sucky" people???

Some of us have a fear of falling of cliffs. Do you think this should deter us?

Ski patrol was always one of the jobs when we played M.A.S.H. in school.

Amy- The same thing happened to my mom. She had a really bad accident when I was first learning to ski when I was five. She gave it up and doesn't miss it.

Jen- It's a pretty tough learning curve, but is rewarding once you get the hang of it.

Grant- Yes, apres-ski can be fun, too.

Teri- There aren't too many cliffs where I ski.

K.I.D.- You played MASH in school!? There are more pics @ www.andsomeguy.com/skipatrol

They used to show his films in my gym classes at my high school (Lyons Township, in Lagrange) if the gym teachers were feeling lazy.

I've tried to love skiing and I just can't. I can ski, I do ski, sometimes I don't mind it, but I can't really get loco about it.

The Warren Miller films, however, are freaking awesome! When I lived in VT it was tradition to see them every year with my dad and my brother. It's so cool to see them on tour in a theater filled to the brim with whacko skiers hooting and hollering. I love it!

The debut of Cold Fusion in Boulder was a huge event this year and the Warren Miller opening is an event I attend every year. It's always a great psych-up for the up-coming ski season, and we've had a doozy this year.

Used to watch with my father.

I'm so jealous you got to go skiing!!