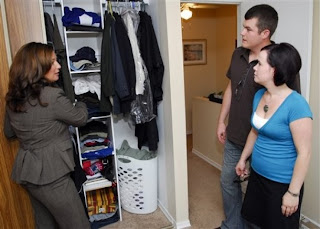 As some of you know, I work in the residential design business. I also watch my fair share of HGTV real estate-related reality programming - shows like My First Place, House Hunters, and Property Virgins. I watch them so frequently that I've memorized Sandra Rinomato's entire collection of ass-hugging pant-suits. I've noticed that a lot of the things the prospective home buyers are looking for on these shows do not reflect what I've seen in my practice. I'd like to take a minute and dispel a few of the myths being perpetrated by these shows:

It Was Just As Glenn Beck Prophesied... 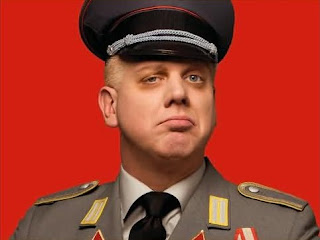 I know. I was as surprised as anyone.

After watching Congress vote to enact sweeping health care reform the night before, I was awoken this morning to the sound of a squadron of Commu-Nazi soldiers breaking down my front door. They grabbed me out of bed, threw me in the backseat of an electric car, and took me to the nearest abortion clinic. It didn't matter how much I tried to explain that I was a man and thus unable to conceive a child. When they finally determined that I wasn't pregnant, they figured they had me there and might as well remove something, so they took out my pancreas and sold it to an ACORN employee for a pack of menthol cigarettes.

Just like Glenn and his "Chalkboard of Freedom" said they would.
Posted by Some Guy on 3/22/2010 10 comments: Links to this post

Labels: the legislation that destroyed america 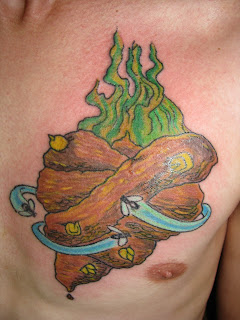 Labels: not including my fiancé

Ways I Annoy The Shit Out Of My Fiancé, Part 2 (Which Rhymes With Poo)... 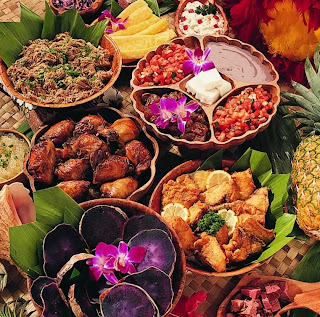 Sometimes, Megan will tell me she's going to the store and ask me if there's anything special I'd like for dinner. Ever since we went to Hawaii, my answer is always the same thing - pupus (pronounced poo-poos). It's become a reflex. Then I go into a lengthy explanation about how much I love eating pupus and how delicious pupus are. I tell her how the only place I want pupus is in my mouth. It's around this time that she gives me a look that is part revulsion, part pity and I think to myself, "Jeez, don't get mad at me! Pupus are legitimate food items. It's not my fault Hawaiians name their food after excrement."
Posted by Some Guy on 3/15/2010 5 comments: Links to this post

I grabbed this off a Facebook post. There truly is no end to the amount of cringe-worthy videos available on the internet. This may be old, but I'd never seen it.

Labels: they call me sweetness 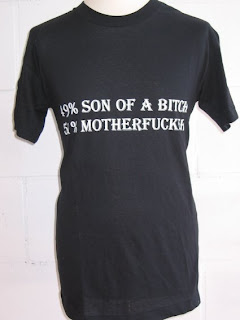 Why do we always hear about the sons of bitches, but never their daughters? Is there something in the bitch DNA that prevents them from having female offspring?

And what about fatherfuckers? Surely there must be a few of them out there. If you know one, have them get in touch with me. I want to make sure they get the publicity they deserve.
Posted by Some Guy on 3/11/2010 4 comments: Links to this post

So I Gave The Whole "Chatroulette" Thing A Spin... 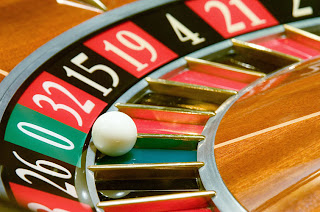 No matter what you do, chances are
you're gonna encounter a few dicks.
Posted by Some Guy on 3/07/2010 No comments: Links to this post

Documentary Film Of The Day: We Live In Public... 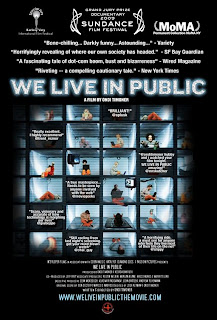 I usually don't do these posts back-to-back, but in the spirit of strange people doing strange, creative new things, here is another one to check out. It's the story of Josh Harris, an eccentric, relatively unknown pioneer of the internet. I could relate to this movie on a certain level thanks to my experience with blogging and sharing videos. Interesting stuff! 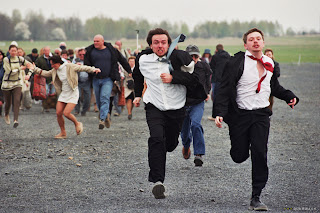 Why is this angry Czech mob chasing these two guys in suits? Watch this movie and find out. It's the kind of crazy shit I like!

You Knew I Couldn't Resist, Right?...


I remain captivated by THIS.
I have been watching it more than I care to admit.

Edited to add: Megan just watched this for the first time. She made it about halfway through before she asked, "Do I have to watch this whole thing? This is upsetting." She wondered whether it was smart to let other people see me like this. I have to admit, it is pretty terrible, even by this blog's standards.