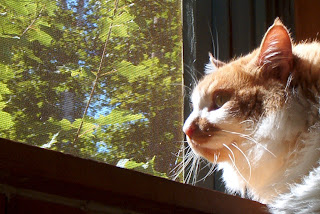 I'd like to thank all of you for the nice comments regarding The Assman. He is about a week into his treatment and it has been a tense, confusing experience. I was told to give him 2 units of insulin, twice a day, and feed him special food for diabetic cats. He is supposed to eat around the same time he gets his shots. For this first week I wanted to be faithful to what the vet told me to do. I was very precise with when I did the injections. The problem was that he refused to eat the new food. He has always fed himself throughout the day, so I knew getting him to eat at specific times would be a struggle. Turns out, getting him to eat AT ALL has been tough. I called the vet Friday. He told me to see if he'd eat his old food with some of the new stuff mixed in. He also said that it's OK to skip an injection if he seems really lethargic (which he did). I skipped Friday night and Saturday night's injections. Since then I have been giving him slightly less than two units to see what that does. He seems more energetic and has at least eaten a little, although not as much as I'd like. Tomorrow he goes in to see how his glucose levels are. Again, I appreciate your positive thoughts!
Posted by Some Guy on 2/19/2007

It seems a cat can be as finicky when it is sick as it can when it is healthy. I must have been a cat in one of my previous lives.

It's all gonna be cool.

Thanks for the update, Chris. I'm sure it will all just take some adjustment and tweaking, and pretty soon it will be routine for you guys.

Assman loves you for
giving him his medicine!!

Jen- I'd like to especially thank you. Your comment in the original post really hit home and made me realize that I needed to do whatever I could to make him healthy. Thanks!

Hooray Assman! I'm so glad things are looking up, even if it's a slow start.

It's a start right?

He's such a beautiful boy. Before you know it, you'll both be old pros at this.