My Saturday So Far (Includes Some Movie Recommendations)... 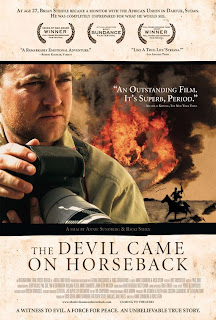 I'm the kind of person who wakes up early, even if I don't have to work. Since I was up at 7 and knew it'd be a few hours before Megan would be up, I decided to watch a Netflix movie on-line. She's not as into movies as I am, so it worked out well. I watched "The Devil Came On Horseback" which features the first-hand account of an American observer taking pictures of the atrocities in Darfur and how seeing what he saw affected him. It is an extremely sad, but important film. It'd make a great companion piece to another great doc, "Lost Boys Of Sudan". So my morning is off to a rather depressing start. After the movie ends, Megan gets up and suggests lunch at a place we like in town. 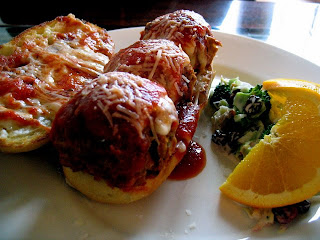 I order my old standby, a delicious meatball sub
that can only be eaten with a knife and fork.
I argue it's the best sandwich in town. 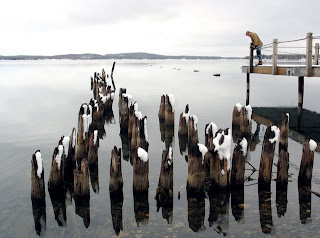 Then we took a walk to the lakefront.
Megan took pictures.
You can't see it, but I'm holding her purse.
I hate holding purses, but there was no one around, so I made an exception. 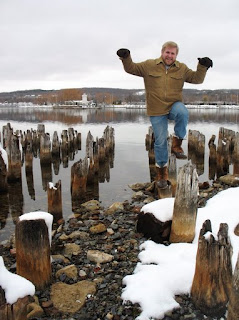 Here I am demonstrating my best crane technique.
Ralph Macchio WISHES he had my skillz.
(That's skills spelled with a z, people.) 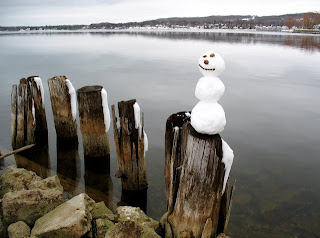 The snow was good packing, so I did a little snowman.
My first attempt looked a little drunk. 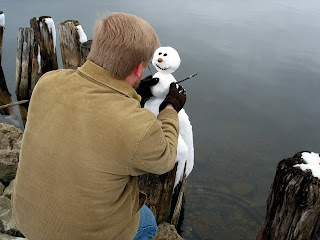 His head fell off when I tried to put the arms in,
so I had to make another. 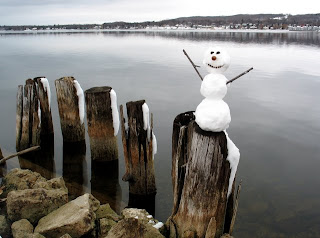 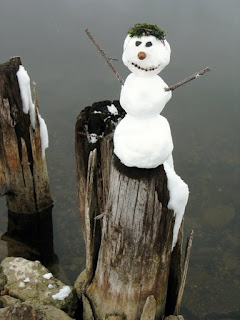 We added a little seaweed toupee for good measure and left it like this.
Aren't we just fucking adorable?

By the time we got home, a Netflix movie was in the mailbox. Megan was going to take a bath/shower, so I watched the movie. It's called "I Am A Sex Addict". It was made by Caveh Zahedi, who I remembered from "Waking Life", a favorite movie of mine. The movie is fantastic. If you don't mind frank talk about sex and prostitutes, this movie is worth a look. It's really unlike anything I've seen lately. It combines documentary footage and performance in an interesting way. Definitely a Netflixer.

So now I am checking blogs and I have my Molson Canadian and some chocolate-covered pretzels by my side. I love days like this. It's cool to have someone to share them with.
Posted by Some Guy on 1/12/2008

We vacationed at Boyne Mtn last March and fell in love with your area. On a visit to Petosky, we found Chandlers and I still dream about our meal - it was exquiste.

I just saw the book that I guess the movie is based on-The Devil Came on Horseback-haven't read it yet but your review makes me want to.
Damn! That meatball sandwich has meatballs the size of lower Manchuria! That looks so delicious!
Yes! Like you, I hate to hold my wife's purse at the mall or store etc! I put it on the ground/floor next to me istead of holding it by the straps! My wife gets all mad at me for doing that, but hey, I can't help it!

Glad to be here.

Eve and I also saw "I am a sex addict" and we loved it! Good call on that one.

Enjoy the Molson Canadian, my favorite "non-microbrewed" beer North of the border.

The snowman somehow reminded me of Mr. Bill, or was it a mini-Chris trying to distance himself from holding a purse?

Caveh filmed some of that in San Fran and it seemed like he was getting a write-ups in the alternative press every other week. I got burned out on the hype, but if you recommend it...

Isn't Bea Arthur in I am a sex addict?

I have no reason to believe you would enjoy books just because you enjoy movies, but 'What Is The What' is a first person account from one of the Lost Boys of Sudan, written by Dave Eggers. Excellent. And if you watch 'No Country For Old Men' and wonder if the book is as good as the movie, it is. Better maybe.

::sigh:: I remember days like that. They're in the B.C. era-- Before Children.

What a relaxing day. Love the snowman. He looks cute atop the pillar.

I used to have purse-holding issues, too. It's nice to be so mature now.