Since Vikki asked and I've been asked before, I wanted to explain fish decoys and how they're used. Pictured above is a trout decoy. The stick is called a "jigging stick" and, unlike this one, can often be intricately carved itself. The decoy is hollowed out on the underside and filled with some sort of weight, either washers or lead or something. This makes the fish neutrally buoyant so that it "swims" like a real fish. Forgive the poor quality of the picture, but here you can see what it looks like: 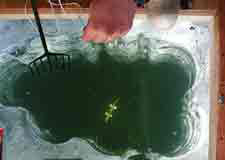 A hole is cut in the ice, much larger than if you were using a line and hook. The fisherperson "swims" the fish around in small circles to attract other fish. He holds the jigging stick (unlike this yahoo in the picture) which is attached to a short line which is attached to the top of the decoy. When other fish come near, they spear them with that trident-looking thing. It is a lot more involved than sitting and watching a line for nibbles.

I have never done this, but I know of it through my involvement with fishcarving. Calling my fish "decoys" is probably misleading. Most of the fish I carve are purely decorative. I've only ever carved one working decoy. For those of you that haven't seen them, there is a link on the side to pictures of my work.
Posted by Some Guy on 3/02/2007

I had no idea!

I got to say that fish have gone down in my regard as a result of this information. I thought most freshwater eatin' fish were relatively solitary creatures, and wouldn't give two shits if there was some dude bouncing up and down in the water on the other side of the stream. How disappointing to find out otherwise.

Interesting! I had no idea that those things serve a purpose and I enjoyed looking at your carvings.

This is so cool. I miss fishing, I haven't been in years. We used to go walleye and perch fishing up in Minnesota and Wisconsin every year.

Chris usually post a lot. There hasn't been a post in several days. Is he okay? Are you okay Chris?

Vikki- Sorry to shatter your high opinion of our cold-blooded friends.

B.O.- That sounds wrong to me.

Dave- Have no fear. I don't always post on the weekends. I had to ski patrol both days. I'm fine.

When my mom lived in Arkansas on one of those beautiful lakes made from the White River, she had a guy come to the house to do some work. The guy asked if he could go down to the dock on his lunch break and 'noodle'.

Mom was a brave woman. She asked. (Not sure I'd be ask'n what noodl'n is, myself - sounds like shaky ground)

Apparently he just dangled his finger in the water, attracted the fish, and grabbed 'em!

I know, sounds weird. Remember... it was rural Arkansas.

Do you know how they know the toothbrush was invented in Arkansas?


Because if it was anywhere else it would be called a TEETHbrush.


note: I loved the place and so did my parents, who retired and lived there for over 20 years.