First Day Of The Season... 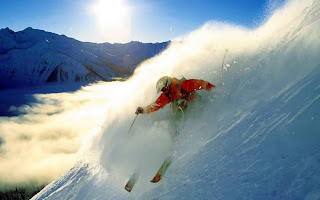 Yesterday was my first day skiing of the season and, while it didn't look quite like this, conditions were decent for this early. Despite the fact that there hasn't been too much natural snow thus far, the area where I patrol is known for its quality snowmaking. If it's cold enough, they can cover the hill pretty quickly. In the past, "fake snow" had been considered inferior to the real stuff, but new technology and methods have made it hard to tell the two apart. It was a slow day, accident-wise. I had to haul one toboggan, but didn't have to do any first aid. My muscles were a little sore last night, probably due to being a lazy slug lately, but I feel fine this morning. Now, bring on the Sunday morning pundits!
Posted by Some Guy on 12/02/2007

I tried to ski once when I was growing up in Michigan but I could not stay up. I also sucked at ice skating too so I guess it was a good thing we moved south when I was 12.

what's all that white shit??

Wow, you have more snow than we do.

I remember when fake snow used to look like small ice pellets and it was HORRIBLE to ski on.