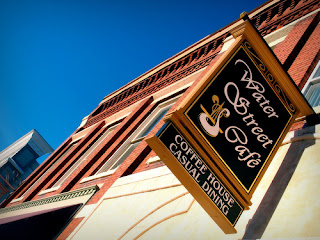 Megan and I have been eating at this restaurant in town for a while now. It's called the Water Street Cafe (duh). We've also ordered what is pretty decent pizza for somewhere so far from Chicago. They make an outstanding meatball sub, my usual order. Today I realized they also sell pizza by-the-slice. If I had a restaurant, I would want it to offer pizza by-the-slice. It''s a great thing to have on the menu. If you're not really that hungry, but you still want a little something, what beats a slice of pizza? Answer: nothing. Or you can get a bunch of them if you like. It's OK because they're cheap. 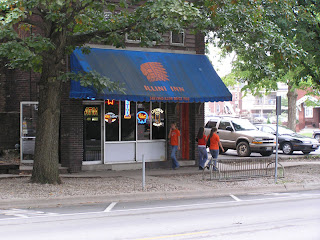 My favorite bar at University Of Illinois was the Illini Inn. It had a lot of things going for it. For one, it was a nice escape from the bigger meat-markety bars in campustown. It was close to where I lived. They sold six packs of Old Style to go. They had awesome pinball machines. Most of all, upstairs a guy named Willie sold pizza slices (and nothing else). Even if we weren't drinking at the Illini Inn, we'd usually pass it on the way home and stop for a cheap slice.

I think all restaurants, Chinese places, German restaurants, what have you, should offer pizza by-the-slice.
Posted by Some Guy on 12/16/2007

come to NYC
every single pizza place (and there are at least 300 within a mile from me) sells pizza by the slice.......

tho at lombardi's you can never have just one. even if you try

The Lady Who Doesn't Lunch: said...

I've seen the place - we'll have to check it out the next time we are up (not til spring thaw - we're not crazy). We always eat at Chandler's when we're there.

I'm always on the lookout for a killer meatball sub.

Face it, you just want a piece of that pie.

I always special order it not sliced and eat the whole damn thing!

I lived less than 100 yards from the Illini Inn, and I never ate are drank there.