There's A Bug Going Around... 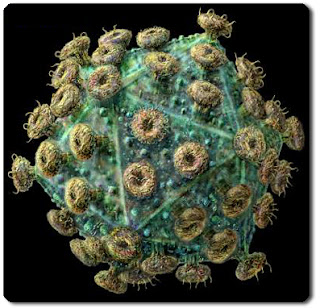 (This is a picture of a virus. It appears to be covered in Cheerios.)

A few people have tagged me with Splotchy's viral story. Since this strain is not as far along as the others, I'll continue it:

If you are one of the carriers of this story virus (i.e. you have been tagged and choose to contribute to it), you will have one responsibility, in addition to contributing your own piece of the story: you will have to tag at least one person that continues your story thread. So, say you tag five people. If four people decide to not participate, it's okay, as long as the fifth one does. And if all five participate, well that's five interesting threads the story spins off into.

I woke up hungry. I pulled my bedroom curtain to the side and looked out on a hazy morning. I dragged myself into the kitchen, in search of something to eat. I reached for a jar of applesauce sitting next to the sink, and found it very cold to the touch. I opened the jar and realized it was frozen. (Splotchy)

My first idea was to put the applesauce in the microwave. Hey, I was still tired. Could I scoop some out and put whipped cream on it? No, too solid. Why was it so damn cold in here? I walked over to the thermostat and saw that the heat hadn't clicked on all night and the temperature had dropped substantially overnight. Now, tired and hungry, I opened the access panel on the heater. There's the problem: why was someone cooking a duck in here? (SamuraiFrog)

I bent down and scooped up the uncooked duck carcass. There was no way I was going to let it go to waste, especially considering I had applesauce on hand. I placed it in a roasting pot and went back to reset the heater. As I continued to wake up, I realized that my roommate had spent the night at his girlfriend's place and couldn't have put the duck there. "How the hell did it get there?" I wondered. Just then, an already odd situation became even stranger. The lifeless duck animated, flapped its featherless wings, and began to speak. (Some Guy)

I had a choice to make: do I go along with this impossibly reincarnated duck drama that's unfolding before me, or do I phone Dr. Leary and get my prescription changed? Feeling more comfortable believing the Chemical Dementia theory, I pressed Dr. L's speed dial button. That's when I noticed that the duck was wearing my watch. And he had a knife. And he was telling me to lie on the floor.

I'm about to crash for the day. I promise I will get to this after dinner tonight.

For a smart guy, I'm pretty dense. I'll post this on my own site.

them there Cheerios look fuzzy. maybe they've got mold growin on 'em??

Thanks for being infected.