I Don't Do Many Posts About Architecture... 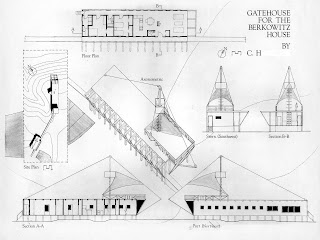 Recently I came across an old design project I did my sophomore year of college. From what I remember, we were assigned a "famous" home designed by a prominent architect. Mine was the Berkowitz House designed by Steven Holl. We had to design a gatehouse for the existing house. The gatehouse had to be compact, have 2 bedrooms, a shared bath, kitchen, a living room, laundry/utility space, and a roof deck. It also had to connect in some way to the main house and had to compliment it architecturally. This is the only decent picture I could find of the main house: 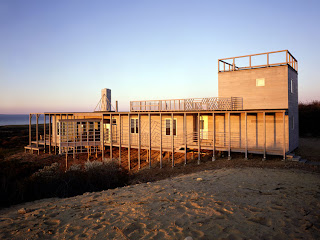 The home is on the Atlantic coast and the architect had written that the light structure reminded him of a whale skeleton. You'll have to be the judge of that. Anyway, I decided to stick with the nautical theme in my design, modeling my gatehouse after a boat, perhaps in pursuit of the white whale (dead as it may have been). I attached the two homes with an elevated "pier". The nautical references are pretty obvious: the shape, the porthole-like windows, the railing details, the crow's nest, and the sail which I saw as some sort of light canopy. I was criticized in my final critique for being too literal. I built a model of it as well which I no longer have. It looks really simple, but it was actually kind of neat. Granted, looking at it now, I see tons of problems and changes I'd make, but this was my first real design project and I felt good about it.

The other day I received a mailer from a builder I've worked for. He featured a remodel project I had done: 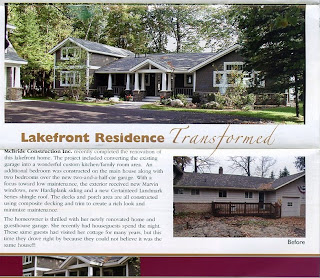 It was an existing lakefront house that the owner wanted to update and enlarge. We converted the attached garage into a big, open kitchen/great room, redid the outside, and added a detached two-car garage with second-floor living space. it sounds like the client was happy with the results. Here is a computer rendering to compare: 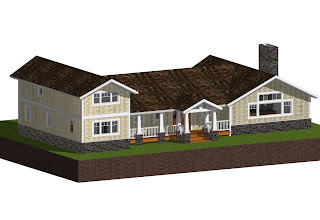 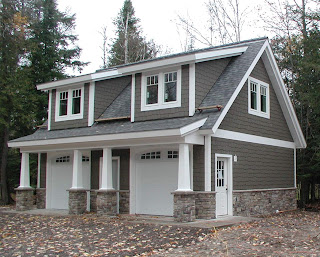 Finally, here's a mock-up of a different home I worked on. I was thrilled to learn that I could insert my own pictures into the model, so I changed what was on the TV screen. I'm not sure if the clients ever noticed. 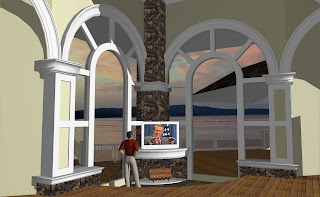 sorry, I've been living in dumpy apartments fo' so many years that archy-tekk-sure don't do it for me.

Other than Fallingwater, of course. If there's a place I've e'er pined for, it's that...

Is the guy in that mock-up jerking off to Donald Rumsfeld??

Also, I love the exterior of that remodel you did. I have fake stone facing on the bottom half of the exterior of my house, and I wish I could find a way to make it look good.

I dig your posts about architecture. If you post 'em, I'll read 'em.

I love your architecure posts. If I had an ounce of math skill I would have been an architect.

I'm impressed you remember so much about the gatehouse project. I only vaguely remember what my design looked like, and I have no idea what the main house was or who was its architect. This is probably why you are now an architect and I, not so much.

That garage was pretty sweet, though the Rummy pic would kill the deal for me.

I liked this post! Architects are such a cool mix of artists and engineers. Seems like it would be a profession that balances right and left brain function - but what do I know.

Thing 3 is considering it as a profession.

yeah, yeah that's great... but what about Bears House or The Bumblebee?