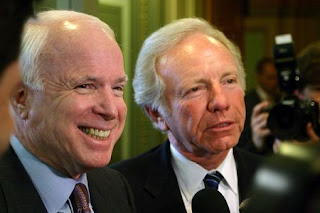 I hope you all have been able to witness Joe Lieberman, in a blatant example of political pandering and out-and-out lying, breaking his word and endorsing John McCain for president. It's featured on my beloved Crooks & Liars. Here's the transcript and my reaction:

(via CNN) KING: Senator Lieberman, let me bring you into the conversation. I want to know how you came about the decision, a dramatic decision, an Independent Democrat as you call yourself, to endorse this Republican candidate for president.

Before you answer, I want you to listen to something you said in our own campaign just about 17 months ago. In July 2006, you were campaigning against a Democrat, Ned Lamont. Much of your party, as you well know, abandoned you in that primary. And you said this to Ned Lamont about the stakes in the 2008 presidential election:

“I want Democrats to be back in the majority in Washington and elect a Democratic president in 2008. This man [Ned Lamont] and his supporters will frustrate and defeat our hopes of doing that.” –07/06/06, Connecticut Primary Debate

SG: Turns out, Joe-Dawg, you're the one doing the frustrating...

KING: Why important now, Senator Lieberman, to elect a Republican President in 2008?

LIEBERMAN: Well, what I was saying in that is exactly the reason why I’m supporting John McCain today.

SG: Huh? Did I just enter some alternate universe? Maybe John McCain turned democrat without me knowing it. "Exactly the reason..."? Senator, you do understand that, um, John McCain is a republican, right? I must admit, I find your strategy to get a democrat elected in 2008 by endorsing a republican a little odd. But hey, you're the smarty-pants senator.

Look, I’m from a tradition of the Democratic Party that goes back to harry Truman and Hubert Humphrey, Scoop Jackson, progressive on domestic policy, strong on foreign and defense policy. My opponent last year and the group around him represented an entirely different point of view, and I stood and fought them. And I said if they won the primary, I worried that they’d embolden and strengthen that element within the Democratic Party.

This is such crap. Joe Lieberman is on the wrong side of the Iraq War and always has been. By 7-6-06, when Lieberman said what he said about his desire to elect a democrat, it was abundantly clear to everyone how the majority of democrats felt about Dubya and his distastrous foreign policy. The majority of democrats were where Ned Lamont was whether Joe chose to accept it or not. Remember, Lamont did win the democratic nomination. So, it's really a case that Joe lied in '06 in order to win over enough democrats to salvage his senate seat. Or it could be that Joe is just too stubborn and clueless to understand that his party left him behind a long time ago. He can relive his idyllic days of Truman, Humphrey, and Jackson all he wants, but the only reason he remains in office is because a bunch of republicans voted for him. I suspect he knew republicans were his only hope back then. Then again, maybe I give him too much credit.

wow, the last time I saw a hideous grin like that it was either on The Joker or that chick who turned into a vampire on Fright Night.

But think about all that Joementum he has.

Congratulations on you and Megan winning Drysdale Awards this year.

Congratulations to you, not on you. Unless you're, like, into that or something.

I think he is into that!

congrats on your Drysdale award! btw!

All I needed from this post I got in the title. I still think of Lili Taylor singing even just hearing the name Joe randomly.