A Post That Is Less About Politics Than It Is About Testicles... 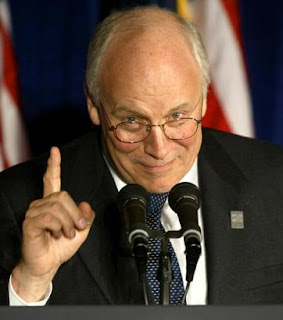 As those of you who follow these things know, Dick Cheney is back in the news, complaining about the current torture probe, saying that it "offended the hell out of him" that the Obama administration wasn't more grateful to previous administration for keeping the country safe.

Allow me to shift gears here for a second. I have stated very clearly, both on this blog and elsewhere, that I advocate non-violent solutions to problems. However, Mr. Cheney has made adhering to this stance challenging. I am going to float an idea that may appear to contradict my pacifist ideals. If you think I should be ashamed of myself, please express your thoughts in the comments. I'm still torn.

What I am proposing is that Dick Cheney voluntarily submit to a good, swift kick in the balls.

You think I'm joking. Hear me out:
If any of you have a direct line to Mr. Cheney, please have him consider my proposal. I think if he loves this country as much as he says he does, he will understand that it is something he must do for the greater good.
Posted by Some Guy on 8/30/2009

Kicking is OK but how about using one of those wrecking balls that swing fron a crane? If that's excessive maybe just a simple bowling ball or a boxing kangaroo?

Dick Cheney's testicles - now there's a disturbing mental image that'll take years of therapy to erase.
Thanks. I owe you...

I think that quite ignoring anything he's ever said/done/tortured/instigated etc., etc., no one can ever debate that he is the scariest looking motherfucker ever to walk this Earth. He looks like that dubious uncle at family gatherings who no one can quite remember how he's related; the guy with the over-moist, rubber lips and pedophillic smirk, who might be asking you breathlessly about your job but really he's enjoying the results of the penis pump he's hiding in his pants and fantasizing about your 14 year old cousin.

I think he should get tied to a chair and have the "Casino Royal" treatment applied to his balls, since he likes torture so much.

Nice of him to create the danger, then rescue you from it.

Cheney is a boob.

AND a ball sac.

"The honor of doing the kicking could go to the highest bidder" ~ I think eBay just had an orgasm.

I think Leonardo DiCaprio would probably have the winning bid for such an honor.

I think he should be subjected to a good torture "probe". Ouch!

Eight years he tourtured me.

We should all get a shot.

It should be a nationally- no, internationally-televised event, preceded by the singing of your national anthem.

I propose a discussion, by a panel of experts, as to why Dick deserves a kicking, and the potential national (and international) ramifications of such an act on the collective psyche.

Finally, in the best traditions of Big Brother, there should be a montage of Dick's 'Best Bits', followed by the main event.

Event to be sponsored by Halliburton and televised by Fox, and co-hosted by O'Reilly, Limbaugh and Hannity, who will then compete in a dance-off to determine who'll be next.

I think that covers everything...