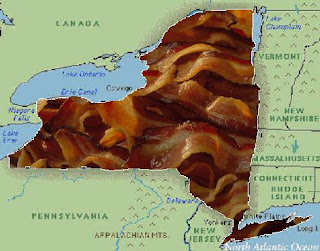 And what about Col-Dorado? You know, like the fish? A.K.A. Mahi-mahi?

It's true, everything really is better with bacon.

You're going to piss off millions of self absorbed asses from NYC if you don't stop attacking New York.

Was this an attack on New York? If so, I apologize to my wonderful New York readership. That certainly was not my intent.

I could totally live in that really crispy area on Long Island.

Stop it. You're making me hungry.

As one of those self-absorbed asses, I want to say that New York is now even MORESO the awesomest state in the union.
Thank you.

What Jay said and I can hardly wait to see what you do with Hawaii.

Of course God came up with a whole list!