A Documentary Double-Feature: Style Wars And POPaganda: The Art & Crimes Of Ron English... 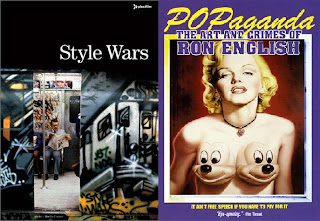 When it comes to documentaries, I'm always on the lookout for stuff I haven't seen yet. When I find something, I immediately add it on Netflix where there are currently 81 titles in my queue. The first film, Style Wars, was recommended in multiple comments on this post on The Documentary Blog. POPaganda was on list called F!ilms2CB4uDi3. I received them at the same time and watched them back-to-back, not knowing they'd have similar subject matter. Both are about outlaw artists. Style Wars was made in 1983 for PBS. It follows a number of prominent graffiti "writers" in New York City. I thought it was incredibly well-done. POPaganda is about Ron English, an renegade artist who made his mark by covering over billboards with his own take on advertising. They're both about people who are desperate to display their art to as wide an audience as they can and who will risk arrest to do it.

After watching these I noticed the similarities between what they were doing and what I'm doing with the blog. Granted, I'm not really risking much (other than a little dignity) and I'm not being as in-your-face about it as a graffiti artist, but I can relate to the desire to have people look at what you're doing. I have to admit, I get a kick out of looking at the StatCounter thing and seeing people from all over the globe finding my blog by searching for "Sandy Duncan's Glass Eye" or the "G0-Go Gophers". Also, like graffiti art, there is no guarantee that someone who sees my blog won't be offended, which I like.

So are you going to "enter the contest" on my blog?

I keep hearing about "Style Wars" as well, I need to check that sucker out.

I have the memory of a sieve sometimes but did you ever see the documentary "The Bridge" about people who choose to commit suicide by jumping off the Golden Gate Bridge? I remember seeing that a few years back and being totally disturbed by it. It was interesting and really depressing. I just never found anyone else who'd seen it to ask their opinion.

Zibbs- Only if I feel I can be competitive.

VA- Yes, I saw "The Bridge" . Even though it's extremely depressing, I still think it's an amazing film.

A crate of spray paints is now in the mail to you. I suggest wearing dark clothes and a hoody when you paint at night.

QUALITY I really like this, it reminds me of a graffiti artist I saw at http://www.hire-a-graffiti-artist.co.uk their is a few more good graffiti artists on the site.