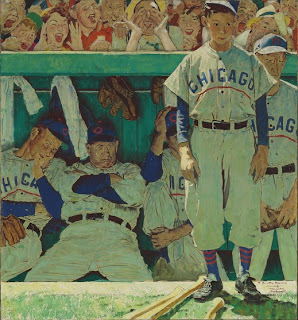 ...but this one was pretty vivid, so I'm going to make an exception.

So I'm at a Cubs game at Wrigley Field and someone I don't know comes up to me and asks if I'd like to watch the game from the Cubs dugout. I was a little skeptical, but I decided it was too good an offer to pass up. This person led me to a special entrance which we passed through without anyone asking who we were. As we were walking down a corridor I was in disbelief that this was actually happening. We entered a run-down locker room and I proceeded to take off my shorts because I thought I'd be too hot. I had on tidy-whities (which I haven't worn since I was a kid). I then entered the dugout, feeling a little out of place. I looked around and noticed that there were boxes of candy everywhere - all kinds. I asked someone if you had to pay for it and they told me no, I could have all I wanted - free! There was also a bar at the far end with a guy serving drinks. Again I asked if you had to pay. No, they told me. It was an open bar. I asked for a Dos Equis tall boy can (which I've never seen and don't think exists). I took my beer and tried not to get in the way as I watched the Cubs lose, 5-1. I can't remember who they were playing.

The weird thing was that, in the dream, the Cubs dugout was along the first base line rather than the third base line where it actually is. As soon as I realized this, I woke up.
Posted by Some Guy on 12/22/2009

Obviously it's a sex dream ... and not being able to get to first base.

In your undies with candy all around in a men's locker room? Dude, come out of the closet already.

It's too bad the cubs didn't win...maybe the dream was prophetic?

It all means that the Cubs will continue to loose until the switch out of tighty whiteys.

Hmmm running out of meterial eh?

I had almost the same thoughts as BeckEye.

All that beer and candy? No wonder they haven't been to the World Series in ages!