There Are Very Few Things I Find It Hard To Joke About... 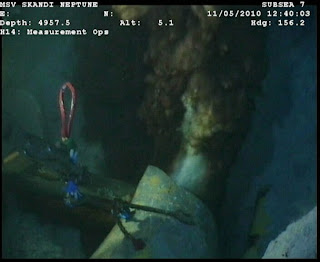 The ongoing oil leak is one of them.

Ignoring for now the debate over whether we should be drilling for oil offshore at all, I'm going to accept the fact that it's happening and will likely continue for the foreseeable future. I'd like someone to explain to me how it is not grossly criminally negligent for the drilling company to NOT have a safeguard in place, ready to deploy at a moment's notice, when engaging in a practice as potentially risky as offshore drilling. To me, it seems pretty obvious. If you are going to drill for oil in the middle of the ocean, clearly the worst-case scenario would be some sort of failure that results in both loss of human life and a catastrophic breach of the oil line. Since the second part of this worst-case has such profound impact on so many things, why is it wrong to expect any company doing this sort of drilling to provide proof that they have a mechanism that has been subjected to rigorous testing that will immediately stop a leak? To think that, at this point, people still don't have a clue how to make this shit stop makes me fucking sick. And for those who would say I'm just some freedom-hating hippie liberal for demanding the strictest regulations and oversight possible, go fuck yourselves.
Posted by Some Guy on 5/26/2010

It is truly stunning that there never seemed to be any contingency plan for an accident.

Thank you. I could not agree MORE with that. It makes me actually furious to read about it. The thing that got me last week was I read this thing from someone at BP that said (I paraphrase) "Thankfully, we have managed to recapture some of the oil." and I thought, "WTF dude? You recaptured some oil? Well good for you, not losing EVEN MORE MONEY." Not a word about the impact of what all that oil has DONE but they recaptured some. I think oil companies need to be held way more accountable for things like this and it should be entirely their responsibility to put things right afterwards. They can afford it.

I've been thinking the same thing. Schools have to practice for fire, tornado, and lock downs. Ships have life boats. Cities have disaster drills. But BP had NO PLAN for an oil leak? Not even a small one? That is negligent.

And Vegetable - right! Lord knows we all lay awake at night worrying about BP's profit margins and hoping they don't have to suffer financially. But the Gulf Coast wetlands are a small price to pay to keep BP rolling in dough, right?

A-effing-MEN! I can't even think about it because it makes me sick. Sick and mad.

You know what pisses me off most about this? That BP can't figure out how (or doesn't really care) to stop the leak, but they're forking over millions of dollars to Florida to create an ad campaign to try to convince tourists to keep coming to Florida because their water is clean. Yeah, that's not at all a waste of time, money and resources.

Haha. I just gave you a post request in the comments section of my blog. PLEAAAAASSE consider it!

I almost started crying the other day watching the news about this. The whole mess and BP's (I believe) criminal behavior is sickening, at best. If Bernie Madoff went into the clink for massively destroying many people's lives, I feel like heads should roll for this one as well. It won't make this already horrific situation any better, but someone(s) needs to be held responsible, dammit.

Not to mention their liability caps.

It makes me crazy. I can't even think about it.

There sure had no problems getting a camera there to tape it all, though.

this drives me nuts

BP/Transocean/Halliburton are all criminally liable

they had no Plan B because they didnt NEED a plan B - the govt, which is supposed to regulate saftey - said you didnt need a blow-off cap (or whatever it is called). so BP, in the name of the all might bottom line, did not install one for $500K. those shut off valves are REQUIRED in Europe and even in Nigeria, but not here.

It's depressing to think of the long term effects this is going to have. Those BP bastards should be freaking beaten with sharp and heavy sticks.